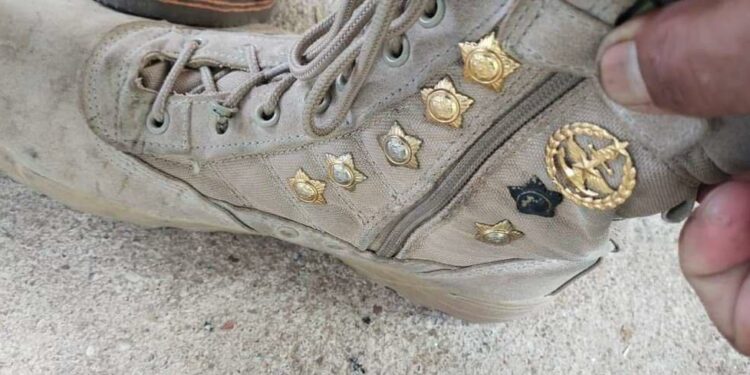 An old shoes decorated by the buttons, badges and stars of the dead military soldiers was sold for USD 18500 and becomes the 22nd most expensive shoes in the world.

In Feb 1 2021, Myanmar military dethroned the elected government and thousands of Myanmar people are against the coup. Since Sep 7 2021, the shadow government, NUG, declared the defensive war against the military junta by organizing the People Defense Forces also known as PDFs.

The shadow government, NUG, finding the funds in different ways such as selling treasury bonds. Myanmar people are also supporting their own money to local PDFs.

Recently, the photo of the shoe decorated by the Epaulette, buttons and stars from the dead soldiers was widely spread in social medias. Pencilo, the pro-democracy activist, calls for the auction for the shoes to raise the funds for the local PDFs.

The price opened with USD 6000 in March 22 and raised to USD 10000 immediately. One person stopped following the bids and donated USD 6000.

The auction was closed with USD 18500 and becomes the 22nd most expensive shoes in the world.

In Oct 2021, Myanmar’s ukulele was also sold with USD 26,000 for the revolution funding and became world most expensive ukulele.